***Don't forget to enter my giveaway for your choice of 6 white porcelain ramekins or a copy of 400 Calories or Less by Our Best Bites.  You can have 4 entries, but be sure to enter by Monday, March 7, 2016 by midnight PST!***

Oh my goodness, I hope you like this dish as much I have.  Super yummy chicken and roasted potatoes and broccoli drizzled in a sweet and flavorful sauce all baked up in one pan (so there are hardly any dishes!!!).  So good! 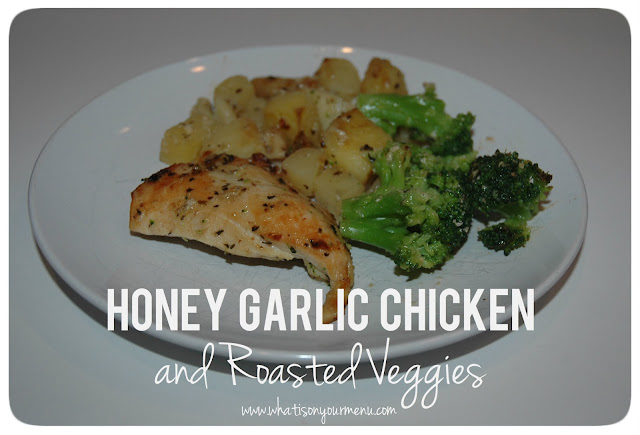 I've made this dish twice this week.  I made it on Tuesday for a church dinner.  However I underestimated the time that it needed to bake, especially since my oven was full with two roasting pans in it.  Things turned out okay, not fabulous though...I had to crank my oven up as high as it would go so I didn't show up at the dinner with crunchy potatoes.  Instead, I showed up with not-quite-as-soft-as-they-should-be potatoes.  Turns out almost everyone else that brought chicken, potatoes and broccoli had the same problem as me.  We survived.  I was kind of embarrassed though.

I made a few mistakes that I learned from.  One of my mistakes was only looking at the baking time on the original recipe and not leaving myself enough baking time before the meeting started, obviously 25 minutes was not enough time.  I gave myself an hour of baking time but ended up baking it for 1.5 hours since I had triple the recipe in my oven. The second mistake was using disposable aluminum pans to bake it in, which seemed to make things bake SLOWER and not as hot.  Using a real pan makes everything actually roast and not just turn to mush.

I made this for dinner tonight in a 9x13 pan and it worked out so much better!  My only mistake was that I didn't bake enough chicken.  It was gone in a flash!  Next time I'll use a cookie sheet and not layer the chicken and veggies.  I'm excited to make it again!

I was pumped when I realized that this dish is gluten free!  Yay!  I'm always looking for gluten free recipes so I can have my celiac friends over.  And it would be perfect to take to a friend who had just had a baby or is sick.  They could cook it when they're ready to eat or just take it to them hot out of the oven.  AND, it's super easy to prep in advance and cook at dinner time.  I actually prepped my dinner the night before and then baked it at dinnertime.

5 out of my 6 family members like it, but the one that didn't is the one that doesn't like anything with flavor.  He requested that I rinse his chicken and broccoli off so it wouldn't have extra taste to it.  I'll definitely be making it again.

Recipe from Damn Delicious, I changed the preparation and baking method a bit.