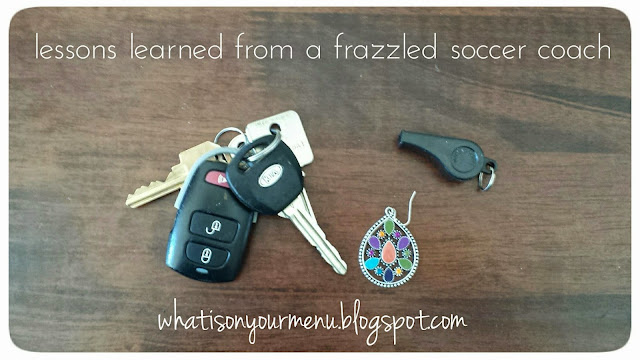 Yesterday I almost decided that coaching soccer is for the birds, or actually, just for people that don't have four kiddos.

Want to read about my day yesterday?

I started out the day great.  Planned and posted by menu by 8:45 am.

Got out the door and went to the dentist.  No cavities!  I have been blessed with very healthy teeth.

Went to the grocery store without any kids (since my little guy was at my friend's house).  Got everything I needed except allergy medicine (it wasn't on my list).

Picked up my little guy from my friend, who generously gave me a zyrtec (which worked great!).

Cleaned up my house.  Started laundry.  Got my baby down for a nap.

My friend, Christina, is moving today, so I'd offered to make her dinner.  I made Swedish meatballs, cloud light crescent rolls, chocolate crinkle cookies along with some mashed potatoes, gravy, green beans.

I picked up my kids from school and gave some hot rolls to my daughter and her friends who were going to play practice.

Came home and read with my kindergartener.

Then the craziness started.  I tried to bake the chocolate crinkle cookies (which are delicious, unless you cook them too long like I did), while I cut up a million potatoes to boil, and finish the rest of the dinner prep while I helped my 3rd grader with his math.

Things started to unravel as I ran out of time.  My kitchen got increasingly hotter (we've been having July weather, not normal for September).  I started making messes and became increasingly not patient with my 3rd grader, who for some reason didn't automatically know the definitions for "grouping property of addition" or a bunch of other terms that I ended up having to google.

I barely had dinner done in time to run it to my friend before we went to soccer practice.  I actually had everyones shoes or cleats on and water bottles filled up.

But then I couldn't find my keys.  Aagh!  We looked for over a half an hour for the keys.  I messed up every room in my house frantically searching for them.  I thought for sure that my little guy hid them somewhere.

Soccer practice was at 5:30.  I told my friend I'd bring her dinner over at 5.  So at 5:28 I called my sweet friend, Julia, who's husband was coaching another soccer field and asked if he could let my soccer kids play with them until I made it there.

She sweetly offered to load up her kids and come to my house to see how she could help.

My husband finally answered his phone and said he'd meet me at the soccer field.

After saying a few too many cuss words (which I normally don't say and which I regret saying).  Then having my 8 year old say a prayer with me that we could find the keys.  I finally found them.  On the back of the couch.  Just where I left them.

Julia pulled up to my house just as I found them.  She's a sweetie!  (and she has a fabulous blog too)

We drove to the soccer field while I called my friend and apologized about being late with dinner.

We rounded up the other five kids on my soccer team while I apologized to the parents for not being able to find my kids and being 15 minutes late for practice.

I got to the soccer field determined to tell the other parents that I can't coach.  I have too many kids and am too scatterbrained.  I had no idea what drills or games to have the kids do.  I'd been meaning to plan it beforehand, but got too busy.

In the end it all worked out.  I didn't quit coaching.  Soccer practice was fun, even though I still have no idea what I'm doing.  But I'm a mom and have worked with kids in school and church a ton so it's not a big deal playing with the kids for an hour.  The kids don't care what we do at practice.  And the most of the parents aren't really paying attention to what we're doing out there either.  They're just happy that they don't have to coach.

After soccer practice ended my daughter called on our extra cell phone from home wondering where we were.  I'd totally forgotten to ask my friend to drop her off at the soccer field instead of our house after play practice.

And I lost one of my favorite earrings at the soccer field.

Dinner worked out.  I took my friend dinner after practice and said goodbye!

We had dinner together as a family, even though it was like 7:15.  The meatballs were dry since they'd been sitting in the oven for too long, but they were still edible.

The dishes eventually were done.

Kids were in bed by a semi decent time.

The laundry was eventually folded and put away so it was no longer covering my bed.


At the end of the day I learned a few lessons...

1.  I need to calm down and be a better example to my kiddos.  How in the world do I expect them to deal with things calmly if I can't.

2.   I have sweet friends and a supportive husband who help me and don't mock me when I'm almost in tears because I can't find my keys.

3.  Dinner needs to be done before my kids get home from school.  They deserve my undivided attention.

4.  After all of that craziness, all that my eight year old wants me to remember is that soccer players can't wear earrings so coaches shouldn't either.

I'm thankful for a new day, forgiving children, and a chance to do better.

Now I need to go look for my earring.  It was my favorite.