The other day I was getting ready to take my baby to the doctor for his four month check.  My three year old had fallen asleep on the couch (which he hardly ever does), so I woke him up.  He seemed a little warm, had flushed cheeks and was a little shaky.  It was odd, because he'd seemed fine all day.

So, we went to the doctor for the baby's wellcheck and found out that Mr. 3 Year Old had a double ear infection.  It was convenient, since I didn't have to pay anything extra for another doctor visit.  :)

But, ear infections = medicine. My three year old does not like to take medicine. 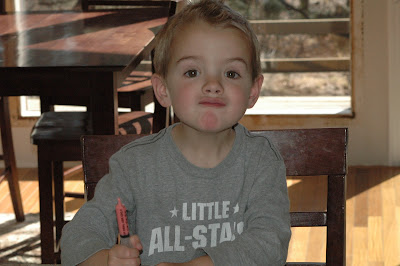 I needed to think of a new medicine hiding idea...

While we were at the grocery store getting the prescription I remembered that I had some root beer at home.  I got some free root beer since I bought ice cream.  Nice!  I love free things!

When we got home I gave my little guy his medicine in a little cup of root beer.  He slurped it up and then asked if he had anymore medicine to take.  So, I gave him some tylenol to help with his fever.  And he slurped that up. 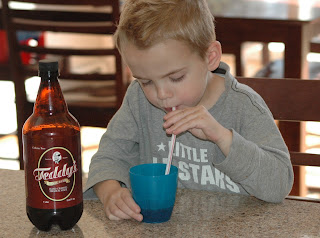 I know it's not the heathiest idea to let your three year old drink root beer twice a day.  But, hey, I'm picking my battles.  And it's getting the medicine down happily.  Hopefully some day he'll just drink the medicine like his older siblings.  But until then we'll be washing it down with a sugary drink. What are your medicine taking tips for 3 year olds?  Have a happy Wednesday!