April 01, 2009
My almost 5 year old daughter loves to watch Jon and Kate Plus Eight on TLC. After watching it the other morning she asked if we could make some Monkey Munch. I didn't watch the show with her so I wasn't quite sure what they were making. I thought it sounded like Chex Muddy Buddies, and after Google-ing Monkey Munch I found out that I was right. 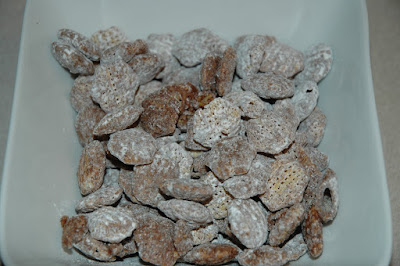 Monkey Munch
This is our version of the original recipe that is a little bit healthier. I'm not convinced that this recipe even needs butter. I think next time I make it I'll leave it out. This recipe uses 1/2 as much butter as the original calls for.

Measure cereal into large bowl; set aside. (I added more cereal at the end since there was a lot of chocolate.) Microwave chocolate chips, peanut butter, and butter in microwave bowl, uncovered on high for 1 minute; sit. Microwave 30 seconds longer or until mixture can be stirred smooth. Stir in vanilla. Pour chocolate mixture over cereal in bowl, stirring until smooth. Pour into large plastic food-storage bag and add powdered sugar. (I just put the lid on my large bowl instead of putting it in a bag). Shake until well coated. Spread on waxed paper to cool. Store in airtight container in refrigerator. 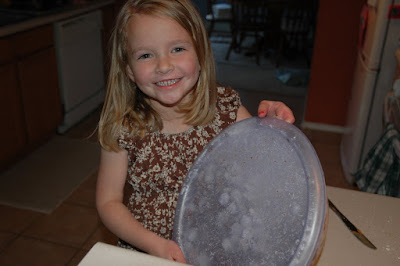 Just thought I'd warn you that Monkey Munch is addicting. You probably shouldn't sit down with the big bowl or it will disappear before you know it.